"Annette has the universe in her voice."...Barbara Ireland

Annette's performances are marked by her compelling alto and moving songs that "touch you to the bone". In the tradition of the poet songwriter and with rich tones reminiscent of Linda Thompson or Natalie Merchant, she weaves a spell both startling in its intimacy and expansive in its vision.

"I found my first guitar in an old tin wardrobe in my basement. Its bridge was broken but it was love at first sight, as if I found a buried treasure in my backyard. The room spun and everything. I glued the bridge back on and never looked back.”

Annette was always writing and singing but took a break from performing to attend to family and grow her massage practice. Now she is out singing again and quickly becoming known in the DC area as a powerful songwriter and performer. Her songwriting influences include Jane Siberry, Lucinda Williams and John Prine to mention just a few. Both down to earth and deeply atmospheric, Annette’s songs are explorations into longing, love, loss, God, home, homesickness and hope.

Annette's debut CD, Songs from the Talking House, was awarded Contemporary Folk Recording of the Year by the Washington Area Music Association in April 2016. She also won Honorable Mention for her song Don't Look Down in the 2016 MidAtlantic Song Contest.

Annette performs in local and regional venues and festivals from DC up to NYC. In January of 2018, she started Songwriter Sundays, a monthly concert series showcasing exceptional local and touring songwriters, at the very cool new venue, MilkBoy ArtHouse in College Park, Md. In 2019, she started a new series, Local Cream, which showcases local and regional songwriters. Annette was also invited to join Azalea City Recordings. Her latest album Love & Fire, will be her first release on the label. She also co-hosts a songwriting circle at Asparagus Media in Takoma Park, Md.

Indie-folk songwriter Annette Wasilik has been writing songs ever since she found a Sears Silvertone abandoned in a tin wardrobe in the family basement. She was 14 at the time and very shy but eventually starting performing in with friends in local venues, bars and festivals. Later when her daughter was born, Annette turned her focus to her massage practice and caring for the family. When she was again able to turn her full attention to her music, she dug in with all she had. In April 2015, Annette released Songs from the Talking House and in 2016 it won Best Contemporary Folk Recording of the Year from WAMA, The Washington Area Music Association. Later that year, her song “Don’t Look Down” won Honorable Mention in the 2016 Mid Atlantic Song Contest. She will release her next collection in January 2020. Annette also loves to wrangle artists and curates and hosts Local Cream, a monthly showcase featuring local and regional songwriters and co-hosts a popular songwriters’ circle in Takoma Park, Md.

Buy Songs from the Talking House CD or mp3 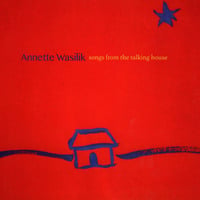