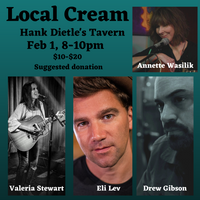 In the round showcasing the best songwriters in the area. This month Annette hosts Valeria Stewart, Eli Lev and Drew Gibson' 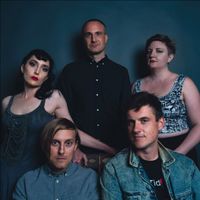 Local songwriters Teething Veils and Annette Wasilik are performing at Potters House on Saturday, February 4 at 7:00 PM. Accessibility: the performance space is at ground level. The entrance is at the sidewalk, with no steps. Restrooms are also on the ground level. Please message Greg with any accessibility questions or concerns. We will do whatever we can to accommodate. Teething Veils began in 2006 in Washington, DC, playing very occasional live shows at places such as the Montgomery College Planetarium and their own living room at 611 Florida Ave, becoming more active about five years later. They have released five LPs (Velorio, 2013; Constellations, 2014; Sea and Sun, 2017; Canopy of Crimson, 2020; and To Have and to Hold, 2022) and a 7” single (Dinner Date, 2015) through the artist-run DC-and-Santa-Fe-based collective Etxe Records. They have played live with audiences in 43 US states plus the District of Columbia, and two Canadian provinces. The band members also play, or have played, in The Antiques, Daamsel, Kohoutek, The OSYX, Parlor Scouts, Prom Concussion, Seamstresses, Silo Halo, and Void Vision. "These little songs—sepia-toned yet searching, eccentric yet melodically inclined—add up to something that feels like its own pocket universe, sometimes wistful, sometimes the kind of menacing only achieved via a late-career Tom Waits death rattle." -Washington City Paper “If the latest from this self-described chamber-folk outfit feels funereal, it isn’t just because bandleader Greg Svitil sings like a eulogist, or because Hannah Burris knows how to make her viola weep. It’s because funerals allow emotions to be purged and smothered, making time feel stranger than slow.” -Chris Richards, Washington Post Annette Wasilik writes award-winning songs of love and longing; angels and demons. Annette's debut album, Songs from the Talking House was named Contemporary Folk Recording of the Year by the Washington Area Music Association. She released Love & Fire in January 2020 which landed at #6 on the Folk Alliance DJ chart and #1 on NACC chart. Now she is beginning to tour nationally. Annette also curates and hosts "Local Cream", a monthly showcase featuring the best local and touring singer/songwriters.

"A stunning songwriter. Love & Fire is a masterpiece." ~Tom Prasada-Rao "A dead solid perfect singer/songwriter putting out material straight from the heart, the words, the music and voice all come together so perfectly...Killer stuff." ~ Chris Spector, Midwest Record "In a perfect world, Annette Wasilik would be a star." ~ Ken Nagelberg Baton Rouge Community Radio WHYR 96.9 FM Songs from the Talking House ~ Voted CONTEMPORARY FOLK RECORDING OF THE YEAR by Washington Area Music Association "Annette has the whole universe in her voice." ~ Barbara Ireland "My wife and I were addicted to Songs from the Talking House for two weeks straight...and we hear a lot of CDs!" ~ Mike Beck, Access Film, NERFA, Folk Alliance Presenter for 14 years The café and bookstore will be open during the show so feel free to grab something delicious to eat or drink or pick up your next favorite read! 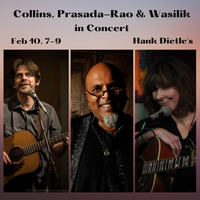 Kerrville winner Wes Collins is in town and Tom Prasada-Rao (also a Kerrville winner) and Annette will play in the round for an early show at Dietle's Friday night, Feb 10, 7-9. Tickets will be available at the door and soon available on-line through Eventbrite.

"Wes Collins has a wonderful gift for telling stories from truly unique points of view. Every narrator in Jabberwockies reveals thoughts I've had but would certainly be terrified to express. Wes is a courageous songwriter. Wes also has that magical musical sensibility that makes me hit repeat on his songs. He makes my favorite records and he's one of my ultimate favorite musical artists."- Jaimee Harris

“Wes Collins’ songs have a way of circling around my mood and elevating it. His music makes me feel better, no matter how my day is going. I congratulate him on his new record Jabberwockies, a stellar collection of new songs, beautiful vocals, and glorious harmonies by Jaimee Harris and Crystal Hariu-Damore. I can’t stop listening to it, I love it!" - Mary Gauthier

“Tom Prasada-Rao has been a gentle giant on the folk scene since the early 1990’s” (NPR). He tours around the country, produces records and teaches songwriting. He won Kerrville’s New Folk Competition in 1993, Falcon Ridge’s Most Wanted list in 1997 and 13 Wammies over the years. In May of 2020 TPR wrote “$20 Bill (for George Floyd)” which has since been covered over 200 times, and awarded NERFA’s “Song of the Year”. 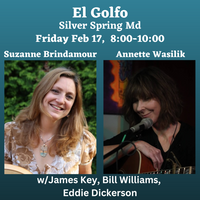 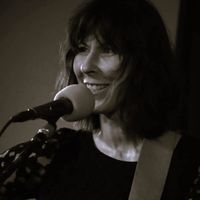 Join us in Broadlands VA for an evening with one of the DMV's premier singer-songwriters, Annette Wasilik.

Supper and beverages will be available---The menu will be sent to you the day before in our "details email" (as will the address, which is in Broadlands, VA).

Suggested donation: $25-30/person (100% of all contributions are given directly to the artists) (Cash)

Artist's merchandise (CDs, etc.) will be available for sale, so bring a little extra cash.

Suggested donation $25-$30 Click on the above ebrite ticket link to reserve a spot. You will then be emailed the address.